Back in October I managed to get my 7400 Logic PLL Based Switcher in the third place category of the Dangerous Prototypes Open 7400/4000 Series Logic Contest. Dangerous Prototypes had the neat idea to let the winners pick their own prizes from the many sponsor donated kits & parts; that way everyone gets something they want. I picked out one of the 3x ProtoStack ATmega328 Developments Kits they donated. I've been messing around with my Arduino Uno for a while and was looking to expand my Atmel AVR knowledge a bit and thought building up this kit and turning it into an Arduino clone would be a fun project. I figured I'd give a little review of the kit as I went along as well.

The ProtoStack ATmega328 Development Kit came in a well packaged antistatic bag that had individual heat sealed sections for the PCB and components. I also got a free USBasp programmer which I was not expecting (Thanks ProtoStack!). I did have an Atmel JTAG ICE mk-II that I was planning on using to program the ATmegga328, but the USBasp is a bit more compact and I thought I'd use that instead. 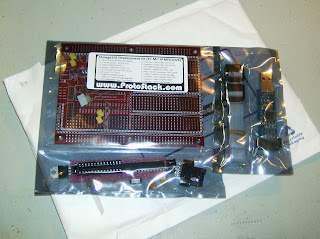 The ProtoStack User's Guide for the ATmega328 kit is very well laid out and is easy to follow. They have put a lot of effort documenting different build configurations to easily change how the board is powered or programmed. They clearly document how to power the board with a DC Jack, USB Device, Coincell CR2032 Battery, or Terminal Block. They also show how to add board stacking connectors. 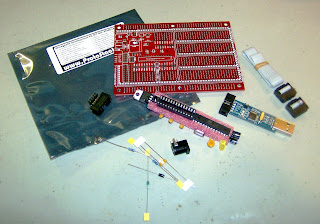 It took less than 30mins to solder up the kit. I did make a few small tweaks to my build. The kit comes with a 20MHz Xtal, but I wanted my board to be Arduino sketch compatible so I installed a 16MHz Xtal instead. I also added a ST Micro ST232CN RS232 level converter (connected to D0 [Rx] and D1 [Tx] and a DB-9 female connector. This RS232 connection allows me to use a USB-to-RS232 dongle to connect this kit to my computer and download sketches from the Arduino IDE. I love that the standard Arduino's come with the USB Device interface built in, but having a native RS232 interface on this kit helps me connect to all my legacy peripherals that still use RS232. I also connected up a Parallax 16x2 Serial LCD by hooking up the RX pin of the LCD display to the D1 [Tx] pin of the micro and hooking up 5V and GND of the display to the boards power rails. 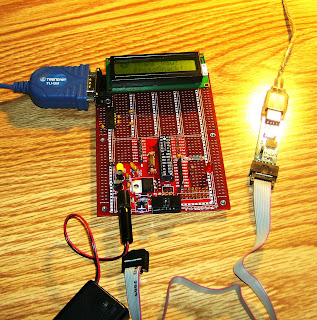 For kicks I added one of Adafruit's cool ATmega 168/328 labels on the micro, so I don't have to grab the schematic or datasheet when doing a quick measurement or mod. 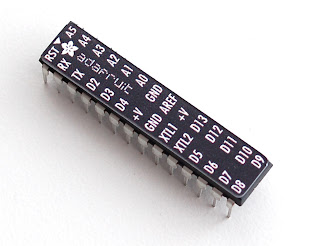 Overall I was extremely happy with how quickly the ProtoStack ATmega328 kit went together; my one complaint is that ProtoStack provides very little programming tutorial help other than pointing to several third party USBasp compatible websites/software. The struggle I had was all of these websites assumed the user had a basic understanding of programming Atmel AVR's which I didn't. All I had done before is used the Arduino IDE to program parts that already had the Arduino bootloader installed.... so that was my first step, I needed to use the USBasp to program in the Arduino bootloader then I should be able to use the RS232 interface to load sketches onto this board.

The first thing I did was download Atmel's AVR Studio for Windows. I got that installed and was surprised to find that even though the USBasp programmer had a windows driver it was not compatible with AVR Studio.... fail. So I grabbed my mk-II programmer I had gotten from a friend and was surprised to find that I could not get that to work either..... double fail. It turned out that the mk-II programmers USB Device interface was broken and it worked fine if I used its RS232 connection instead. This worked, but I wanted to get the USBasp programmer working, so I downloaded a few other free Windows AVR programs.

I loaded AVRdude and started searching for tutorials on how to load the Arduino bootloader into blank parts with AVRdude. This wasn't too hard to find; Adafruit's LadyAda and Sparkfun all had well written tutorials to walk me through the process.

Next I needed to figure out how to use the USBasp with AVRdude. After plugging the USBasp into my laptops USB port I struggled a bit to get AVRdude to recognize that the USBasp was plugged in.

After Google searching for clues as to why I couldn't get it to work I found many posts stating that the Linux permissions for the USBasp required AVRdude be run by the super-user (su) or root. I tried that and still wasn't having any luck. Using the lsusb command I could see that the USBasp programmer was being recognized but it looked like there was a PID & VID ID conflict error with libusb.

ID 16c0:05dc VOTI shared ID for use with libusb

After trying to read the AVR forums for several hours to try and find a solution I remembered that some of my USB flash drives wouldn't work with Ubuntu when plugged directly into my laptop's USB ports, but worked fine when plugged into a 4-1 USB hub that was plugged into my laptop. So I tried plugging the USBasp into my 4-1 USB hub and once I got the permissions setup right it worked great!!!!! (Yeah now I was cooking!)

I loaded up the command shell and moved to the folder that had the optiboot_atmega328.hex file in it and typed in the following command into AVRdude:

Below is the output of AVRdude as the part is being programmed. 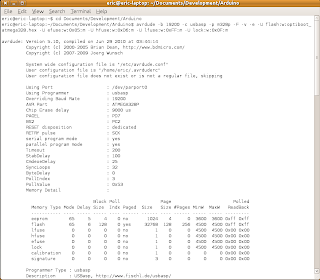 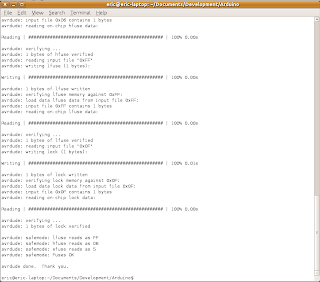 A complete text file of the output is available here for download.

Now that I had the Arduino Uno bootloader loaded into the micro I loaded up the Arduino IDE and wrote a small sketch to display a message on the Parallax Serial LCD. 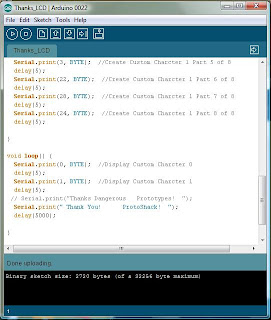 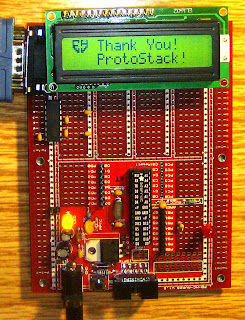 Overall I am pretty happy with the ProtoStack ATmega328 Development Kit and would highly recommend anyone getting one. I am excited to build up a few new projects with this board; having the extra prototyping space without having to stack a proto shield is a huge plus. Thanks ProtoStack for sponsoring the 7400 contest and getting me this kit and USBasp programmer!

Also Thank You Dangerous Prototypes for putting on the contest! It was a lot of fun seeing all the cool project ideas. 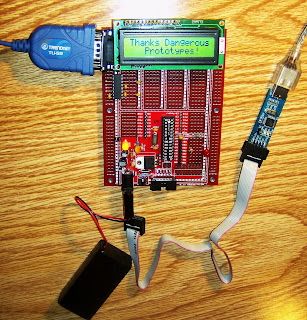 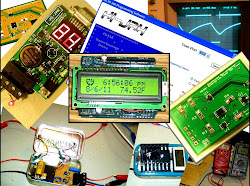 Eric Holland
Welcome to my Blog. Why create another Embedded Designers Blog? Well, I’ve always admired Bob Pease, Bill Klein, Jim Williams, Dave Van Ess and several other Engineers that have graced the pages of so many of the EE publications I read so often. I’ve had the opportunity to work with some great “Grey Beards” as Dave Van Ess calls them and I thought I’d pass on my experiences to others. In this Blog I’ll be sharing my experiences and discussing some of the fun side projects I’ve been working on. I hope you enjoy! 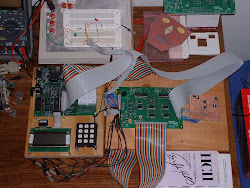 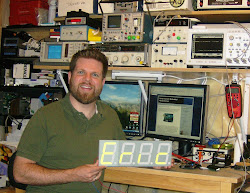 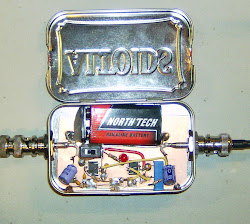 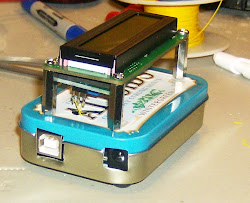 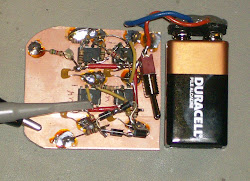 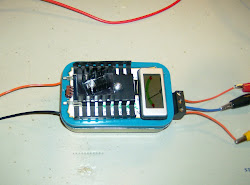